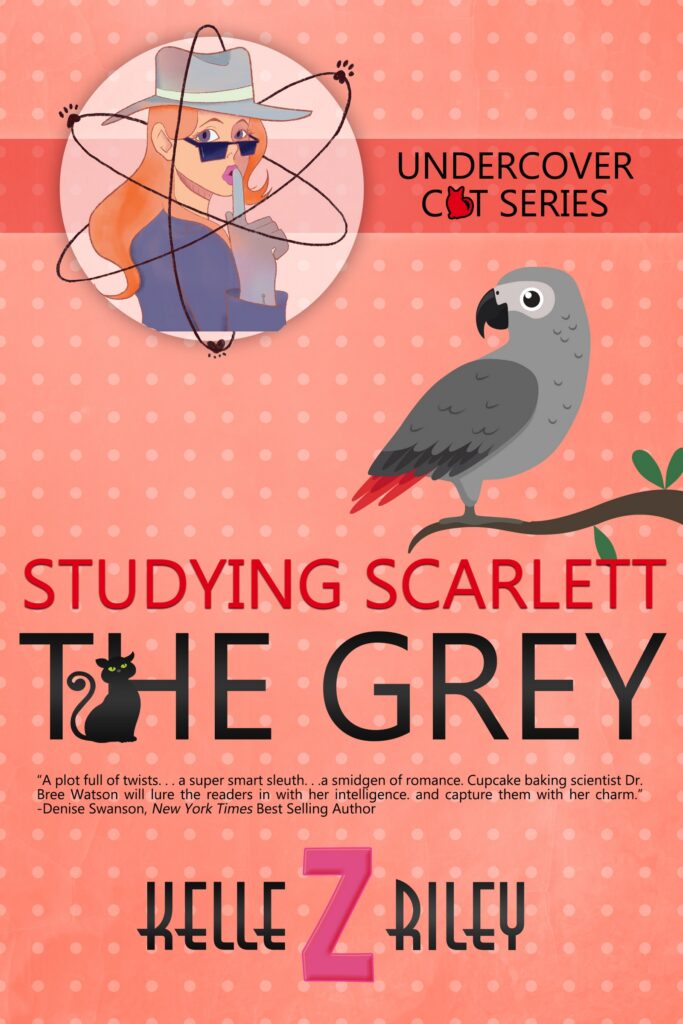 Just another undercover day. Or is it?

Planning and executing a high-stakes, smoke-and-mirrors deception to flush out terrorists for the Sci-Spy team left Dr. Bree Watson ready for a change of pace. An easy, “undercover boss” style assignment fits the ticket perfectly, and leaves evenings free to cuddle with her cat, Sherlock. Unfortunately, the spy world has other plans. The arrival of her nemesis—also her partner’s ex-lover—brings Bree’s worlds crashing together, threatening to destroy her in the process. She’ll need all her wits and all her training to keep one step ahead of:

Soon spying and sleuthing take priority over Sherlock, sleep, and just about everything else. When the mission implodes, Bree must battle more than burnout—she must fight for her life.

Will she beat the odds? Or has she finally met her own impossible mission?

Bree Watson curled her hands around the paper coffee cup, but its feeble heat didn’t penetrate the icy chill in her fingers. A stiff wind whipped across San Francisco Bay, sending tendrils of fog twining among the uprights of the Golden Gate Bridge.

She huddled deeper into her Halloween inspired I survived Pier 39 souvenir sweatshirt, wishing she’d donned more than a long-sleeved tee shirt and her adventure vest for her sight-seeing trip. The multi-pocket adventure vest—her favorite travel accessory—kept her valuables out of reach of pickpockets but did nothing to keep out the cold which knifed through her.

She headed to the main section of the pier, tempted to purchase a second overpriced sweatshirt when a shiver of a different kind prickled her skin. The vibration of her phone in her vest pocket followed.

Named for clever mirror image molecules, the complex mission involved two sets of look-alike agents, at least five mission objectives, and a hefty dose of smoke-and-mirrors misdirection. Bree focused her attention on the mission, calling on her Sci-Spy training to block distractions. Without total concentration from this point onward the mission could fail.

“Tugood’s airplane is approaching U.S. airspace,” Shoe said, referring to their boss. “I expect him on the ground and through customs in forty minutes.”

“That’s cutting it close.” Bree’s words came in labored huffs as she hurried toward the parking garage, calculating the time it would take her to drive to the airport. “Sasha might freeze her little Russian butt off while she waits for me,” Bree muttered, sprinting up the stairs two at a time to the garage level.

Shoe’s laugh reverberated across the line. “I’d like to see that. Unfortunately, my part in this little operation requires me to be far away from her.”

“Lucky you.” Bree slid into the car and started the engine.

Six weeks ago, she’d been with Matthew Tugood on the Pacific Rim, ferreting out a suspected terrorist. Then he’d met up with his former partner, Sasha, and sent Bree home while he accompanied the sexy Russian spy to undisclosed places. The reunion of the former partners put an end to Bree’s illusions that there might be more between her and Matthew than a simple working relationship. Bree was just a curvy chemist learning the spy trade. One who couldn’t compete with a svelte, seasoned operative like Sasha.

Bree eased into a line of vehicles and stepped on the brake waiting for the others as ramp traffic lights merged them, one-by-one, onto the southbound 101. She pulled her blond wig from a duffel bag on the passenger seat and stuffed her own brown hair beneath the curling synthetic strands.

She inched the car forward then braked again, giving her a few minutes to don a wide brimmed hat and sunglasses. As each block passed, Bree transformed, one layer at a time, into her character.

Not that anyone with eyes would mistake the two of them unless Sasha’s disguise included several inches of padding. But people saw what they wanted to see. Bree immersed herself in her spy character. She was no longer Dr. Bree Mayfield-Watson, chemist. She was Cat Holmes, undercover operative for the Sci-Spy organization. Calm replaced her earlier frantic actions. A Harrod’s of London shopping bag in the car’s trunk had the items Sasha requested. Swapping bags with the spy at the airport was nothing compared to smuggling disassembled tech and weapons into San Francisco then reassembling them for the transfer.

Bree grinned, knowing Sasha was getting more than she requested—including micro-tracking devices embedded in the equipment. Sasha may have once been Matthew Tugood’s partner, but he clearly didn’t trust her.

“Here,” she replied to Shoe.

“Tugood’s plane just touched down. Once the coms are active, you’ll hear everything, but they won’t hear you. Remember,” Shoe’s voice dropped low, urgency threading the words, “he’s playing a role with Sasha.”

“He’s always playing a role, Shoe. Even with us.”

Bree bit her tongue. Now was not the time to remind Shoe of all the roles Matthew had played in their short association—married marketing colleague, spy handler, fake boyfriend, corporate lackey in a company he owned. The list went on.

“Bree? You’ve got this. Be yourself and ignore Sasha. Your advantage is that she’s likely to underestimate you.”

Shoe left the conversation and minutes later Matthew’s and Sasha’s voices filtered through the earpiece.

“Are you sure you won’t come to D.C. with me, Matthew?” Sasha’s husky plea ended with an emphasis that made Bree wonder, yet again, what the man’s real name was. Surely Matthew Too-good-to-be-true was just an alias for a man she’d never know in any real sense. “Or do you mean to stay with the inept chemist you allow to play at being a spy?” Sasha’s voice hissed through the connection as if she’d breathed directly into the ear where Matthew wore his com device. “It’s so cute to see you indulge her fantasies.”

“It amuses me.” Sounds of lips meeting in a hasty kiss filled the dead air. “And it gets you the package you need.”

“Is this really good-bye, my love?” Sasha’s husky voice poured over the coms.

Shit. They’d finished the entry process sooner than expected. She jammed her arms into the cheap tan trench coat Matthew had insisted she wear and pulled on a pair of gloves. Damn Tugood for his idea to have her and Sasha dress like some cartoon spy characters. She cinched the belt—barely—over her layers of clothing and dragged her bags from the car, hustling as fast as she could for the tram heading to the International terminal.

Unease prickled along her spine, mingling with sweat from too many layers of clothing. Bree squeezed herself and her luggage into the crowded tram, focusing on the mission ahead instead of the stench and noise of the congested space.

Planning the mission was the difficult part, not the execution. All she had to do was locate Sasha outside the terminal, switch Harrod’s shopping bags with her, and catch a shuttle to her hotel. Easy.

But thoughts of Tugood’s former partner—and her possible reasons for needing the package Bree carried—caused the unease to pool in Bree’s gut. Be yourself. She’ll underestimate you. Shoe’s reassurance focused Bree, settling her nerves.

Eight and a half minutes later, she arrived at the curbside pickup site. Sasha, looking perfect in her version of the hat and trench coat, stood beside a glass enclosed seating area filled with people and luggage. Bree adjusted her bags, approached from Sasha’s free side, and placed her distinctive shopping bag next to the identical one at Sasha’s feet.

The woman glanced at her watch then trained her eyes on the hotel vans in the pickup lane. “You’re late.”

“And you’re lucky I agreed to help you at all.”

Sasha pulled a mirror and lipstick from her purse. “Our mutual friend,” she said, angling the mirror so she could see Bree in its reflection, “isn’t the man you think he is. Don’t waste your time indulging in romantic fantasies.”

She abandoned the pretense of looking in the mirror and turned to Bree, her lips settling into a thin, hard sneer. Faint crow’s feet accented the cold glare in her eyes. “And for God’s sake, stop playing dress-up to try to fit into his world. You look ridiculous.”

Sasha grabbed Bree’s bag and stalked away, disappearing into a car that pulled up to the curb as she approached.

Bree turned her back on the crowds and rummaged through her briefcase, anger pulsing through her, sweeping away traces of doubt she’d had. “Little witch,” she mumbled as she extracted a one-inch square cube from the case. She activated a switch and set the tiny drone into motion. With a quick flick of her hand, she launched it and watched as it rose, undetected above the crowds and set off after Sasha’s getaway car.

This book left me speechless, this was just so good. I was already expecting great things from this series, but this story blew all those expectations right out of the water. Bree is the sassy, smart wonder woman we’ve gotten to know, and her romantic life continues to be… complicated. This time the story genuinely kept me guessing all the way to the end.